The Legacy of Horace Tabor

Horace Tabor’s life story is a testament to hard work but also a great anecdote about short-sightedness. From a simple stone-cutter, he would grow to become one of the country’s wealthiest men, only to lose his riches after spending lavishly and investing poorly.

Born in Vermont in 1830, Horace Tabor and his wife, August, moved to Leadville in 1850, where he mined California Gulch and she ran a shop and took in boarders. When his claim proved to be unprofitable, Horace became a merchant, too, eventually giving supplies to a pair of young men in exchange for one-third of their mining claim. Luckily, this claim struck silver and provided the Tabors with sudden wealth. 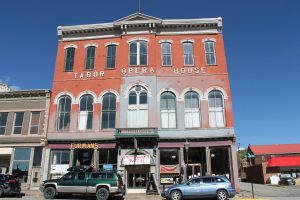 Horace Tabor used his new-found wealth to start several other mining companies, eventually becoming a very wealthy businessman. However, he was also a reckless spender, which made Augusta unhappy.
Horace Tabor’s notoriety was cemented when he divorced his wife and married his mistress, Elizabeth McCourt (Baby Doe). Though his marriage with Baby Doe was a happy one, they spent their fortune recklessly. When the silver market crashed in 1893, they fell into poverty. Horace died in 1899, wrongly insisting his mines would again become profitable.

Much of this “Silver King’s” legacy still stands in Leadville. The Tabor Home, Tabor Opera House, and Matchless Mine and Baby Doe’s Cabin are available for tours and help tell the story of Horace Tabor.