In 1879, when the silver boom was at its peak, loads of the precious metal were being shipped from Leadville to Buena Vista via stagecoach. The days and times of these transfers were well guarded, for it was common for bandits to highjack the shipment.

Despite this secrecy, one thief managed to know which stage would be carrying silver and pulled off several robberies. His knowledge baffled lawmen. How could the thief know when no one was told when the silver was being transported? 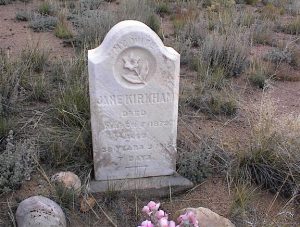 Sherriff Kirkham came up with a plan to catch the bandit, which he kept a secret, wanting all the glory of catching the thief for himself.

On March 7th, he dressed up as a female stagecoach passenger bound south out of Leadville. Sure enough, the bandit jumped in front of the stagecoach near the junction of Twin Lakes. Kirkham drew his weapon, the bandit ran, and Kirkham shot him in the back. When Kirkham reached the bandit, he discovered it was his wife dressed as a man!

Ashamed and embarrassed, he chose to bury her then and there rather than bring her back to town. Her gravestone can still be seen today from Highway 24. It reads, “My wife – Jane Kirkham – Died March 7, 1879 – Aged 38 years, 3 months, 7 days.”