The Famous Love Story of Horace and Baby Doe Tabor

Elizabeth McCourt, born in Wisconsin in 1854, was noted for being extremely charismatic and beautiful. In 1877, she married Harvey Doe. Together, they moved to Central City to work the family’s Fourth of July Mine. When the mine proved to be unprofitable, Elizabeth joined the workers to help turn it around. Doing so earned her the nickname, “Baby,” which stuck with her for the rest of her life.

An unhappy marriage tainted by frequent moves, debts, and Harvey’s excessive drinking and desertion caused Baby Doe to sue for divorce. Following a friend, she moved to Leadville, where she met Horace Tabor.

Horace Tabor and his first wife, Augusta, moved to California Gulch in 1860. Augusta proved to be a great entrepreneur, eventually opening a store that would provide for the Tabor family. In the meantime, Horace tried his luck at mining and ran the post office and bank for various camps. The Tabors were beloved by their neighbors for their honesty and generosity. 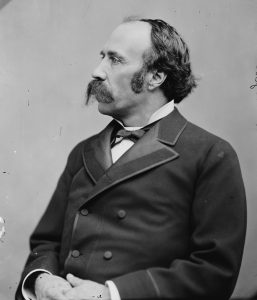 The Tabors’ luck changed when Horace gave supplies to two prospectors in return for one-third of their claim. To Horace’s surprise, the mine struck a huge lode of silver, which he invested in other mines. The Tabors’ fortune grew, and Horace loved the frivolity his new-found wealth afforded. Augusta, however, did not. He spent when she wanted to save, which caused a rift to develop between them. With mounting tension at home, Horace’s eyes began to wander. It was then, in 1880, at the Old Silver Rock Café, that he met the stunning, Baby Doe.

The newly married couple flaunted their fortune by spending recklessly and throwing lavish parties at their Denver mansion. Despite this, Denver’s exclusive high society never fully accepted Baby Doe as rumors of her shameless past soared. Still, the Tabors marriage was full of love, and they eventually became one of the five richest families in the country.

Their fairytale ended in 1893 with the repeal of the Sherman Silver Purchase Act, which caused silver prices, and the Tabor’s lifestyle, to crash. In combination with unwise investments, Horace Tabor lost his fortune, eventually resorting to menial $3 an hour jobs to keep his family fed.

In 1899, Horace died of appendicitis with Baby Doe by his side. It is rumored that some of his last words were instructions for her to hold onto Matchless Mine because he was hopeful it would make millions again.

Baby Doe moved into the mine’s cabin and lived there for her remaining 35 years. She was a proud woman who refused charity. Even when the mine went into foreclosure, she was unaware that she was allowed to stay because of the generosity of its new owners. Destitute and suffering from dementia, Baby Doe died from a heart attack in the winter of 1935. Her frozen body wasn’t found until two days after her death.